Linux on the Acer SW3 laptop/tablet

This machine is the Acer SW3 which is an old tablet PC. It came with Windows 10 32-bit and has a 32Gb internal EMMC storage.

Unfortunately, following many Windows updates, Windows no longer fits in the 32Gb storage and I can't find anything more that can be deleted. Windows won't update and has critical vulnerabilities; new software won't install (there is little space anyway) and Windows is very slow.

So I decided the only way to use the machine was to install Linux.

This is not easy, as in 2021 finding a 32-bit Linux distribution is tricky. But Debian still works.

So I put the installer on a usb stick and tried to install. Getting it to boot was the first hurdle - but solved eventually.

The BIOS on this machine is absolutely terrible. After much experimentation:

I have *eventually* got it to boot Debian from the emmc after looking at this page https://hansdegoede.livejournal.com/24132.html

I copied the EFI boot files from their normal directory (EFI/debian) to where Windows puts them (EFI/Microsoft/Boot) and renamed shimia32.efi to bootmgfw.efi (the Windows loader) - then the BIOS just blindly loads it anyway.

* There seems to be no sound.

Needless to say, this machine is VERY slow and old, web browsing is possible but requires some patience. Videos play with a little skipping.

In this post I'll explain why, and how I designed the Bristol Bot Builders N20 Red ESC electronic speed controller for small robots.

There are quite a few commonly used ESCs available.

The advantage of the DFRobot controller, is that it's build on the back of the N20 motor and can be plugged directly into a receiver. This makes it easy for newbies and flexible for different designs. It also simplifies the wiring - these robots are very small and it can often be difficult to cram all the wires into the chassis.

The good and bad of the DFRobot:

Unfortunately there are some problems:

So in this project, I tried to fix all the bad things but keep all the good things :)

Choosing connectors is one of the most difficult things! The DFRobot esc uses a JST-XH 2.5mm pitch connector. To make it fit, they've put the connector on the opposite side of the board from the other components, and it uses the full width of the board. This means that it's a double-sided assembly. I didn't want to do double-sided assembly as it increases costs and I'm working at a much lower volume.
There are a bewildering array of connectors available, but I eventually settled on the incredibly tiny JST-SH 1mm pitch surface mount and wire-mount connector. Assembly of leads for prototyping was likely to be impossible (it is a super tiny crimp), so I bought some already-crimped leads with bare wires, and crimped my own servo connectors on the other end.

I cannot take credit for this, it was Joe's idea. The idea was simply to have the pcb a similar size/shape as the dfrobot, but with the terminals in a different orientation, so it can go out "sideways" from the motor,

This makes the setup work better for thin robots.

This was a new experience for me - finding a random company to assemble cables. I am pleased that it worked very well.
The crimping for the jst-sh end  is critical - I also wanted to make sure that the wire colours were correct.
The advantage of having these custom cables made - I could specify the length - so I made the cable 80mm, just about long enough for most small robots, but less than half the dfrobot one (which I think is about 200mm)

After some messing around, I decided to use the Attiny4 microcontroller - it is the smallest and weakest AVR microcontroller, and one of the smallest ones generally available. It is in a sot-23-6 package, which is just-about hand-solderable, and has an amazing 4 gpio pins.
I did a couple of tricks -

The Attiny4 can be programmed using a Arduino with the ArduinoISP firmware. After the RSTDISABLE fuse is blow, then it can only be reprorgrammed by putting 12v into the reset pin. I haven't yet found a way to reset the fuse (but I think it's possible). 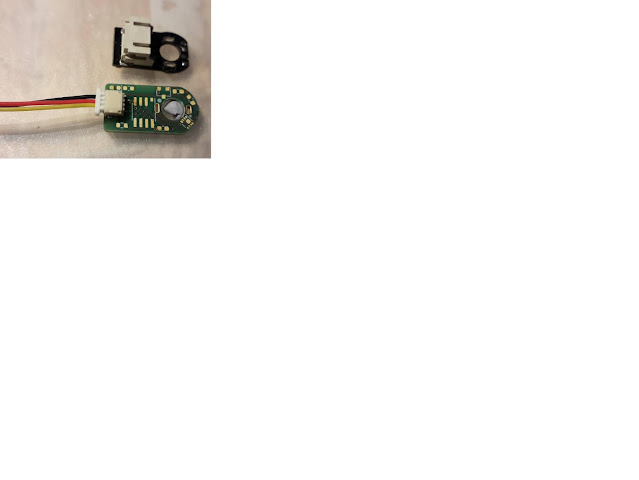 Yesterday they launched a new product, the Pi Pico Microcontroller.

I thought "meh" what's so special? We already have plenty of microcontrollers, and several popular platforms with Makers:

So, what is good about the Pi Pico?

Many of the other popular microcontrollers don't have a "real" USB interface. The Arduino Nano and ESP32 boards have a USB connector, but it's hard-wired into a usb-serial thing. This means it can only ever be a serial port.
With the Pi Pico, it can be a USB serial if you want, but it can also be other things, possibly at the same time:
* HID emulation (become a keyboard / mouse)
* Storage emulation - that's what the bootloader does
Also, the "USB Serial" on the Pi Pico is only emulated, it doesn't have the limitations of a real serial interface, it doesn't electrically exist - it's much faster and can't get its baud rates mixed up.
NB: Yes, I know that a lot of other microcontrollers DO have USB, and the latest ESP* chips have proper USB too.

I don't like to use the term "unbrickable" as I successfullly bricked a "unbrickable" esp8266 :)
But the bootloader is in ROM -so it can't be trashed - and both the SWD interface and USB bootloader will allow you to reflash a Pi Pico.
The Arduinos - are brickable in principle - as the chips have various "fuses" which can be set in a way which prohibits further programming. This is by design, but it's bad if accidetnally activated.
Also the Arduino bootloader, if overwritten, makes it more difficult (although not impossible) to reuse the device.

I think it's fair to say that the hackers who have played with the PIO are only starting to appreciate its capability. I've not played with it yet, but it is:
Some other microconrollers have similar things, but as far as I can see, the Pi Pico's PIO is more flexible, easier, better documented, and possibly more powerful than most of them.
To be fair, the ESP32 also has a peripheral called "RMT" which can do some of these things.

A lot of the other chips in the same kind of price range have a smaller amount of SRAM - which makes even simple things awkward. Also low-SRAM chips have little or no capability of using high level languages or text-based diagnostics (think REPL) - because there simply isn't enough RAM to store the strings.
I tried programming the esp8266 using Micropython - it works, but there is a crippling lack of RAM which makes complex programs impossible (even though there is execute-in-place).
The Pi Pico also has execute-in-place which makes more ram available for applications.

To be honest, it would have been "interesting" to see RiscV cores, but I know that Cambridge-based Raspberry Pi is very ARM-centric. I suppose nobody got fired for using ARM. I'm far less excited about the cores than the rest of the chip.

The PCB / dev board

I've been talking so far about the microcontroller - but the Pi Foundation actually released a dev board (the microcontroller isn't generally available yet - but it will be - and some other integrators have already got samples).
The dev board isn't anything magical or special, but it is quite tidy and looks to have good power regulation.
Personally I'd have quite liked to see the header pins 0.1 inch closer together - but that would probably make breaking out all the GPIOs more difficult or compromise other things - so it's ok.

As far as I can tell this is a marketing gimmick mocking another fruity company.
Weren't the Raspberry Pi 2, 3, 3B+, 4  all Raspberry Pi silicon? They were all chips made by Broadcom but totally to the spec of the RPF and not generally available.  Only the first Pi used an "off the shelf" chip.
It seems the major difference is labelling. And the guts of the Pi Pico presumbly contains lots of IP from different companies. They could have easily outsourced much of the design and/or validation.
So I think it's just marketing words.